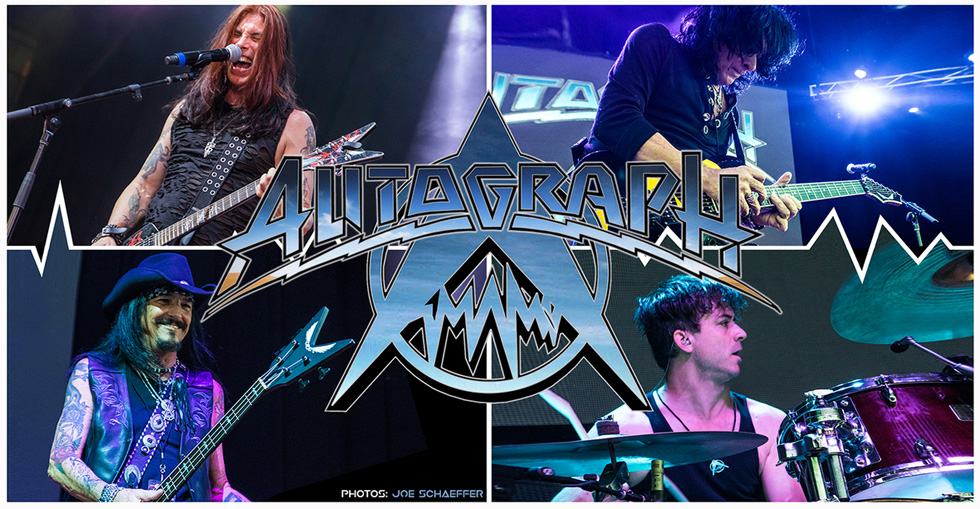 Legendary L.A. hard rockers Autograph will release their forthcoming album named “Get Off Your Ass“. The release is expected to be out on October 6th via EMP Label Group. It will be available on CD and Digital, with a limited edition vinyl LP version available in November.

“Get Off Your Ass” is the first official studio LP from the revamped quartet, featuring original/founding members guitarist Steve Lynch and bassist Randy Rand, alongside new vocalist/rhythm guitarist Simon Daniels, and drummer Marc Wieland.
Lynch, an iconic guitarist, revered Worldwide as a bona fide guitar hero (known for his signature 8 finger hammer-on technique), reactivated the band in 2013 with bassist Randy Rand after reconnecting at the NAMM Show. After approaching original vocalist Steve Plunkett, who was unavailable for the reunion due to other business interests, with his blessing, the newly resurrected Autograph recruited former Jailhouse vocalist Simon Daniels, the rest, as they say, is history.

“Get Off Your Ass” features an updated, hard-edged (and keyboard free) sound for the band. It also features down-tuned guitars, and the fiery, blues-soaked delivery of Daniels, as evidenced on tracks like “Every Generation“, “I Lost My Mind In America“, and the first single, edgy title track “Get Off Your Ass“. The album also features an updated live version of the band’s classic rock staple “Turn Up The Radio“, performed by the current line up.

“Get Off Your Ass”: comments of the band

Guitarist Steve Lynch says:
[blockquote]”Get Off Your Ass” definitely sets a new direction for the band, with an updated, heavier sound, while still retaining the signature melodic hooks people have come to expect from Autograph. This record is bound to get the attention of old Autograph fans as well as the new. So put your ears on and turn this one up!![/blockquote]

Vocalist Simon Daniels, adds:
[blockquote]We are so excited about this record! This is a line up of brothers with a vision and the perfect chemistry. We wanted the record to be musically timeless, and translate a heavier sound featuring the melodies and harmonies, but with heavier guitars and a more “in your face” attitude. The lyrics come from the heart and are directed to people of our current era, with uplifting messages and positive energy. It’s Autograph on steroids.

EMP is the perfect match for us. They understand what we’re doing, they have the same vision and we are grateful to work with such great experienced humble focused achieving people![/blockquote]

A sentiment echoed by drummer Marc Wieland:
[blockquote]EMP shares and supports the same Vision we had for our new album “Get Off Your Ass“. We are stoked to be part of their family!!!![/blockquote]

“Get Off Your Ass”: comments of David Ellefson (EMP President and Megadeth bassist):

[blockquote]When I first moved to LA to go to MI (then known as GIT), Steve Lynch was the guy EVERYBODY went there to learn from. As far as guitar players in LA went, he was THE guy. I never did end up at GIT, we formed Megadeth and obviously went down an extremely different path, but Steve truly is an iconic guitar hero of the highest caliber, and I am so proud for EMP to be able to partner with him and the re-imagined Autograph to release this killer album.[/blockquote]

Forming in 1983, Autograph gave the world the perpetual Rock anthem “Turn Up the Radio“, which still commands nearly constant airplay on Classic Rock stations around the World, and has become an iconic piece of pop culture, making appearances in mass media classics like Grand Theft Auto: Vice City, and more recently in the hit film Hot Tub Time Machine.

With seminal albums “Sign In Please” [1984], “That’s The Stuff” [1985], and “Loud and Clear” [1987]. As well as years of touring alongside legendary artists including Mötley Crüe, Ronnie James Dio, Van Halen and Aerosmith, Autograph left an everlasting imprint on rock ‘n’ roll. Now this undeniable Rock legacy is reclaimed with “Get Off Your Ass“.

Autograph will continue to tour through 2017, and into the new year, with more dates added daily, and an appearance on the 2018 MONSTERS OF ROCK Cruise.

“Get Off Your Ass” will be available for pre-order this Friday, 8/4 here > link