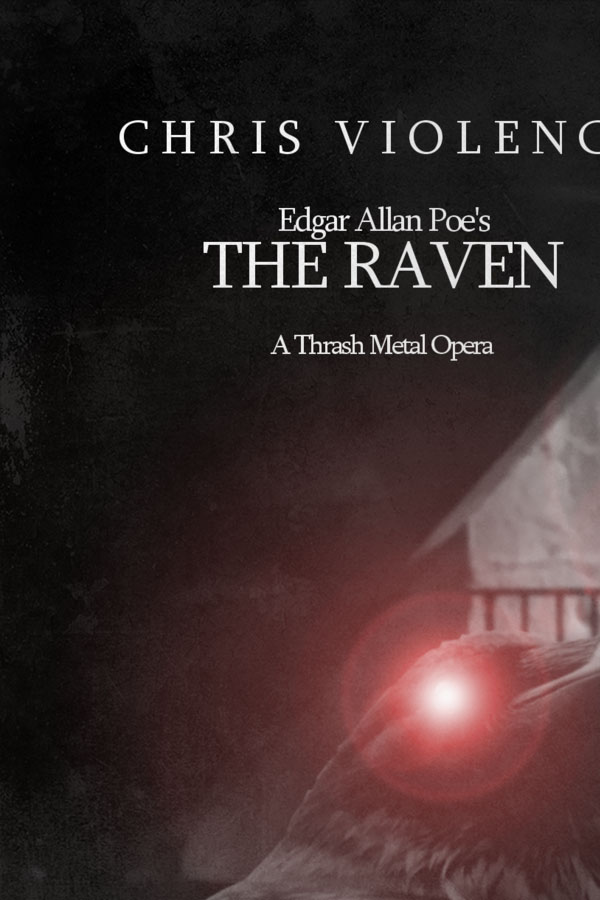 Rome, june 28 – Metal vocalist CHRIS VIOLENCE has released the brand new mp3 single “The Raven” (A Thrash metal Opera) and offering it as a free download.

At the end of 2014 and following the release of the “American Ripper” album, Jon Du Bose and I were already talking about what was next. He had an idea for a concept album / EP that would be five parts, would be recorded as one long track and broken into five pieces later on when I wrote the lyrics for them all. Along with this five part concept idea, he recorded what would become the song “Push Button Pain.

Jon then went to work on this five part mega track. He feverishly worked away, giving me updates as he went. He was like a ravenous dog, tearing through the writing and recording process. Once he started, there was no stopping him. What he presented me in February 2015 was simply insane! It was a twisted Speed Thrash epic on a proportion I had never heard before. It was meant to be five parts that all linked together. The pieces congealed at the end bringing all the pieces back together again.

Once he handed it to me, I began listening to it. All 23 plus minutes of it. It was a beast! Speed Metal riffs to end all Speed Metal riffs. Guitar picking so precise and clean. This piece of music demonstrates once again what an amazing guitar player / bass player / song writer / composer Jon Du Bose really is. But what to do with it all? How do I digest it and find a subject big enough and worthy enough to be added to such a piece of music? Where would the breaks go? I was stymied.

Next, enter Maxxxwell Carlisle (lead guitarist of Hellion). In 2015, while doing my “Traveling Damnation Show” on Metal World Radio, I interviewed Maxxxwell while he was promoting his current album. Off the air, I asked him if there was a chance he would be interested in putting a solo on one of Jon and I’s upcoming tracks. Even though I had nothing with vocals on it, I couldn’t pass up the chance to have Maxxxwell on something! I sent him a few tracks, including what was then tentatively called “5 Realms“, Jon’s mega epic.

I figured Maxxxwell would pick something simple and short, but instead he went all in with “5 Realms“. At the time he was on the road with Hellion, so I wasn’t sure how or when he would get me a solo back, let alone where in the track it would be. I continued to work on other songs, still thinking of a subject that would be worthy of this massive body of music when I received an email from Maxxxwell with the track with the solo attached. I had no idea where in the song it would be, so my first listen was with open ears. He chose one of the most unlikely (to me) spots in the track. A section in the first one third of the song that is slow and moody and he nailed it.

I’m not sure anyone could have found a way to blend into the expression Jon laid out, but it is perfect. In a track with so much going on, he found a way to add to it without stepping on it. Simply amazing!

But what do I do with the vocals?

Rewind back a year or so, before Jon recorded this monster… While surfing YouTube I stumbled across Christopher Walken reading Edgar Allan Poe’s “The Raven“. I thought it was the most beautiful thing I had ever heard. I remembered briefly speaking to Jon about the ridiculous idea of doing that as a song. But as quickly as the idea popped into my head, I dismissed it. With Jon being in North Carolina and I in California, it would just be too huge of an undertaking and with that, the idea was gone.

Still facing a lack of subject matter, idea’s came and went. Lyrical concepts were started and stopped, started and stopped. Nothing seemed worthy of this grand masterpiece Jon had created and Maxxxwell had added too. The subject had to be as massive as the track itself. But what?

Then one night, with headphones on, listening yet again to this track for the upteenth time, hoping for inspiration, it hit me! Could “The Raven” fit on Jon’s epic? A quick google search found the words and upon first playback I was in utter shock how they fit. And they didn’t just fit “OK”, they fit perfectly!

The song you will soon hear, is complete in it’s entirety, unedited in any way. Neither the music that Jon presented me, nor the poem written by Mr. Poe in January 1845. Start to finish, it is as both pieces were written.

Over the next 6 months I recorded the poem of Mr Poe. At times I was forced to stop and google words I had never even heard before. Words that are very much out of the lexicon of 21st century man. I needed to learn not only their pronunciation but their meaning. I wanted to know what the hell I was saying and meaning in order to give the proper expression to the words in their delivery.

The process was grueling. 8 hour days, month after month. Recording and re-recording. My two biggest fears were, the song was so long that:

A) my voice would warm up and change from beginning to end and there would be a noticeable difference from start to finish.

B) the beginning’s delivery would start out “Hot” and I would run out of expressive steam and the end of the song would be dry and dead.

The truth is, Edgar Allan Poe’s poem was so strong, that the energy was easy to uphold.

In the end, the hardest part of the whole process was pronunciation and speed of delivery. The words are delivered rapid fire as Jon’s speed metal picking tears through the musical sections. Line after line, paragraph after paragraph, page after page, one thousand and eighty five words in all. At the end of the recording process I was truly exhausted, physically and mentally. For me, music is more of a “feel good” than it is a mathematical structure.

If something is missing, my mind’s eye sees it instantly. Vocal alignments, corrections, whispers, echoes… all scream out to me as voids that must be filled or corrected. If one word is misaligned it cuts into me like a knife until it’s corrected. And so, many more months clicked by as these details were ironed out, one by one. Listening to the song four times to find anomalies eats up two hours of the day, sometimes to only make a few minor corrections. It was tedious work. But as the months went by, the more the continuity came into picture, the fluidity came into picture and the brilliance of it all came into picture.

I met Matheus through Jon’s Headphone Meditations radio show on Metal World Radio. Jon was playing Matheus’ music and he was also in the chatroom on MWR. We had chatted many times during Jon’s shows. Jon expressed to me that it might be possible to have Matheus mix and master our newest (August 2015) track “Push Button Pain“. Matheus was kind enough to do it and the final version is the one you can download for free on my website. When “Push Button Pain” was complete, Jon told me he had spoken to Matheus again about The Raven. I was a bit apprehensive about asking him, since I knew what a beast this track was. Vocal tracks alone numbered close to twenty, plus all the instrumentation. But Jon reached out and Matheus was kind enough to accept the challenge and what a challenge it would be.

After I felt I had finally finished the vocals, it was handed off to Matheus for him to do his magic. There was a piece of me that still felt there were some holes in the song, some “empty spots”. Jon and I spoke and he assured me that if there were “holes” Matheus could fill them. And fill them he did…

The first mixes came back only a few weeks after he had the tracks. The sound was filling in, little tiny nuances were coming into focus on the vocal side of things and Matheus heard the same things Jon and I heard, that now with the vocals in place, you could hear there needed to be some more lead guitar work. Matheus is beyond prolific in this regard and the parts he added, much like Maxxxwell, blended and added to the overall beauty of the story. The energy of the whole song was reaching full power! We worked together ironing out vocal effects that I liked, small volume adjustments, the standard fare in the mixing process.

Next enter Brazilian foley artist Danilo Battistini. As it was explained to me in an email: “He got interested in The Raven after he saw our updates on Facebook, got in touch with me and created a very nice original sound design, based on the poem, specially for us!”

Danilo created a masterful 25-30 second intro that brings it all together. In that tiny amount of time he expresses everything Edgar Allan Poe was saying in his one thousand and eighty five words. It is not only beautiful, it is also very haunting, on the edge of terrifying.

So now, after almost two years of work, by six different people from all over the globe, one of which has been dead for over 149 years this project is ready for release. There is no way to accurately calculate the man hours invested. All I can hope is that you will give it an uninterrupted listen in the highest format of playback you can.