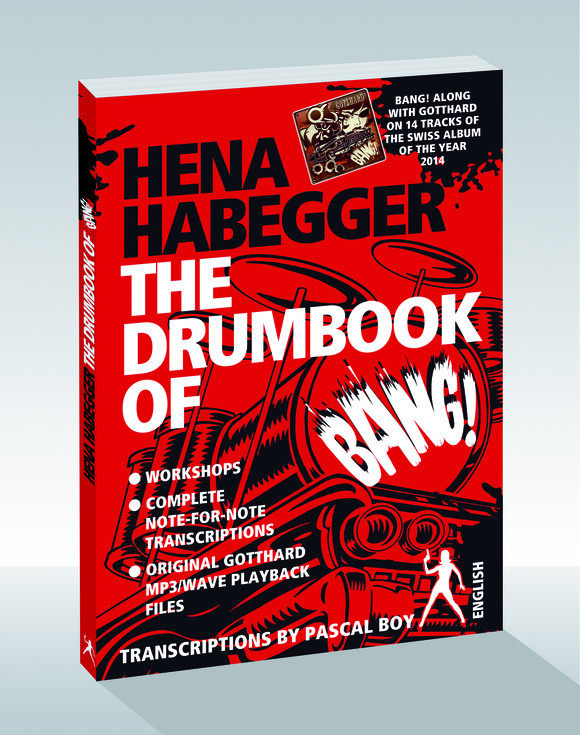 Rome, 16 september – “The drumbook of Bang”, by Hena Habegger from Gotthard is now out!
Successful stage-addict teams up with international experienced teacher, tutor and pedagogue. Nine months later, a perfect baby is born. For Hena Habegger, the engine of the most successful Swiss rock band GOTTHARD, a long awaited dream has come true. In co‐operation with Pascal Boy, Hena publishes his first own drum book which contains more than 100 pages.
Complete drum transcriptions which include workshops for every song, informations, examples and exercises on how to play the tracks one-to-one plus original playback files from “Bang!”, as well as great graphics and pictures, make the book a true masterpiece!

The drum-performance on “Bang!” certainly is the best and most interesting one of my career. That’s why I chose to release a drumbook for this album.

“Bang!” has everything a drummer’s heart desires: up and mid-‐tempo rockers, grooving blues- and boogie-oriented songs, great ballads and even a touch of country with the song “Maybe“.

The book provides deep insights into Hena’s energetic and imaginative drumming. His technique and way of playing have always consisted in serving the song and providing a firm base for both band and song, just like a Swiss precision clockwork does. Timing, dynamics and a solid groove and drive are of the utmost importance.
A special highlight and unique in its kind, are the included playback files. These are the original files from “Bang!“, but without the drum-track and re-mixed. It’s like sitting on Hena’s drum stool and play along to the original
recordings from Leo Leoni, Nic Maeder, Freddy Scherer and Marc Lynn!
Unlike anything else!
Both authors met at a common gig in Bordeaux, where Pascal and his band were supporting Gotthard. They soon realized that both were made from the same maple wood. After nine months of intense work, the two “book-fathers” proudly present their newborn baby! Ready for the big world of drummers!

The book is available through the Gotthard Online Shop and at the
merchandise stand at their shows. Other distribution channels are being checked.