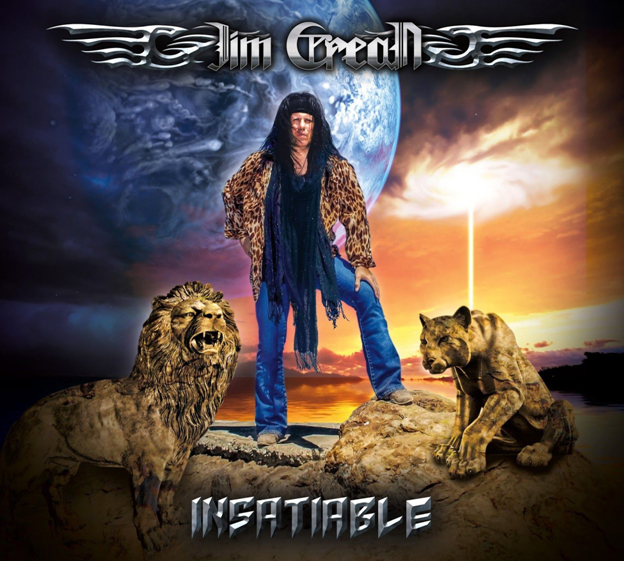 The highly anticipated new album by Jim Crean, “Insatiable” is out. The release is available on Carmine Appice’s label Rocker Records.

~INTRO
The album starts out with a Intro by Don Jamieson from VH1’S That Metal Show.

~CAUGHT IN THE MIDDLE
The second song is an amazing version of the Ronnie James Dio classic song “Caught In The Middle” from the Dio “Holy Diver” album. This version is sung as a duet by Jim Crean and Frank Dimino (Angel) sharing lead and background vocals, featuring the original Dio rhythm section of Vinny Appice (Dio) on drums & the late great Jimmy Bain (Rainbow/Dio) on bass. This proved to be one of the last recordings from Jimmy Bain before his untimely death, making this version a rare and sought after recording.

~OVER THE EDGE
Over The Edge is a remake of the L.A. Guns hit song from the L.A. Guns “Hollywood Vampires” Album. This version features background vocals from the original artist/singer and songwriter Phil Lewis of L.A. Guns! This version will prove to be a fan favorite.

~CAN’T FIND MY WAY
“Can’t Find My Way” is an incredible song by Mike Tramp and Freak Of Nature. The song is also sung in a duet style by Jim Crean and Mike Tramp (White Lion) sharing Lead and Background Vocals. Tramp is best known for his big hit song’s in White Lion. This song also features the original Blue Murder rhythm section of Carmine Appice (Ozzy Osbourne/Rod Stewart/Vanilla Fudge/Cactus/Blue Murder) on Drums & Tony Franklin (The Firm/Blue Murder) on bass!

~SHUT YOUR MOUTH
This song is the HIT on the record, with strong hooks and a real modern feel. Vinny Appice on the drums.

~TURN IT AROUND
“Turn It Around” features Danish guitar wiz Martin Slott (Push) on guitar. It also has Vinny Appice on drums.

~MISS ME
“Miss Me” is a power ballad that features Dave Constantino (Talas) on Lead Guitar and Colleen Mastrocovo (Hair Nation  on Drums.