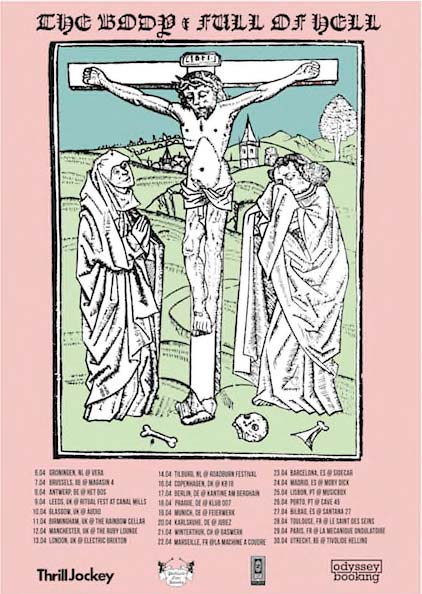 Rome, january 22 – Great news for european The Body and Full of Hell fans because the bands are going to release a collaborative EP titled dythis March via Neurot Recordings. Besides they will tour Europe together this April, travelling across Belgium, Netherlands, Uk, Denmark and many more, including appearances at Roadburn Festival and supporting Coverge’s “Blood Moon” spectacle at the Electric Brixton, London.

As their ongoing live actions attest to, both acts are unstoppable tour machines and initially joined forces for a massive 2015 North American live takeover. Amidst the chaos, the two groups found time to record together at Machines With Magnets in Providence, Rhode Island. The sessions culminated in the execution of One Day You Will Ache Like I Ache, which is ultimately an audio reflection of their surroundings and their inability to cope therein. The result boasts eight scathing hymns along with two bonus tracks.

The Body and Full of Hell Biographies

Forged in 1999 in Little Rock, Arkansas and now based in Portland, Oregon, The Body has been massively prolific since their inception with a sound that is uncategorized and unmatched. The duo writes and acts as one, a deafening wail against a failing species.

Full Of Hell was formed in 2009 in Ocean City, Maryland. In similar ethos, the band has remained relentlessly productive both on stage and in recorded form and has continued to challenge themselves, channeling resonances from across the spectrum of extreme music into a uncompromising wall of oppressive sound.

Through their own respective recordings, both The Body and Full of Hell are internationally-revered as forward-thinking entities of harsh music, delivering their audio torment through incredibly intense and often unorthodox methods.